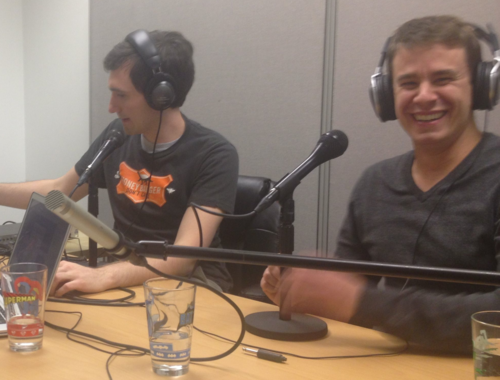 Michael Guterl won’t argue with you about your experiences. The arguer wants to win by having his opinion validated. Michael doesn’t need validation.

After he begged us for years, we finally hired Michael and sat down with him to chat today, and we heard some very interesting things. And of course, I kid about the begging, Michael has been long-time friend and respected colleague of the crew here at Gaslight, we are so happy and excited to have him finally join us.

What was Michael’s introduction to young geekdom? Q-Basic “Nibbles” and “Gorillas”. “Nibbles” is a game similar to “Snake” apparently. And I still have no clue what “Gorillas” is, but it involves digital apes throwing bananas at each other. Some other interesting detours on his path the Ruby: Visual Basic, Perl, and FoxPro. At some point he picked up a pre 1.0 release of Rails, and you know how the rest goes.

Michael is very strong in the way of Ruby. He would cop to that, although I think he knows more about JavaScript than he lets on. It could see today he was almost ready to jump into the ongoing CoffeeScript fat arrow debate of

Read a Lot of Code

It’s apparent Michael knows his stuff. He’s been able to come into a code-base cold, see weak spots, and make practical suggestions. What’s his secret? “Read a Lot of Code”. I’m always personally interested in what Michael is reading in code, blog, or book form.

But the most interesting thing I learned today was about Michael’s specific practice of reading code: Don’t just read the current state of the codebase, read it commit by commit. See the codebase evolve, and understand the workflow.

Michael is sensitive to friction in development, and the frustration of repeating the same problems. Because of this, he’s experimented with very disciplined approaches to testing. As a result he’s cultivated an excellent feel for how much testing is too much, and how much is not enough.

It’s Pronounced How it Looks

I’m always happy when excellent people have boring college backgrounds like myself. As a business major, I’m very glad for the opportunity to code awesome stuff with this accounting major. Plus, Michael is a nice guy who has told me on multiple occasions that he likes the blog. Michael Guterl is huge, and it’s great to have him on board!